When snakes slither into our dreams 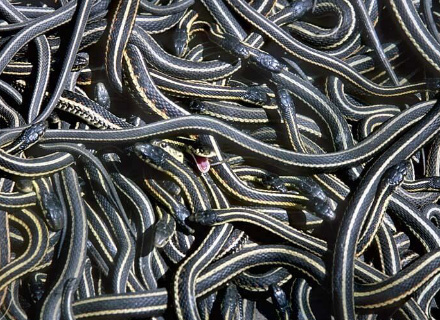 When I first began studying and researching dreams, I was surprised how often snakes slither into the collective dreamscape.  All these years later it still amazes me how many snake dreams are reported to me daily, and the majority of them are rather frightening… with good reason.  Snakes evoke fear in most of us, even to the point of phobia!  They have sharp teeth, a demonic forked tongue.  They can strike at lightning speed and inject you with their poison.  Shudder.

Because of these widely-feared characteristics, the dreaming mind often uses a snake to represent the dangerous, venomous behavior of  someone close to you, and most often, of someone who is typically male.  Yes, the phallic shape of the snake plays a big role in its meaning.

I recently dealt with a snake dream in my nationally syndicated newspaper column The Dream Zone.

Lauri:  You’re a spectator in the dream so it may be connected to an issue in waking life where you are watching things go down, so to speak, rather than getting involved.  Or perhaps you are feeling disconnected from something you feel you should be a part of.

Snakes can represent health issues but more often they can represent someone with lowdown poisonous behavior. There were lots of snakes so that can mean that the waking issue is either multifaceted or that this issue involves lots of people that you feel exhibit low down, poisonous behavior.  And sometimes, the more there is of something in a dream, the more space the issue is taking up in your head.

The spiders suggest that this is something that has really been “bugging” you and that you may even be conflicted about since the snakes and spiders were in a conflict.  The snakes and spiders only coming out at night makes me think that this is about people you feel operate in a dark and shady manner. Since you had the dream last night, something from yesterday triggered it.

John replies:  I am in the media and I talked to a friend yesterday who is also in the media. We were discussing our frustrations with how people operate in field of work and how we are in the same boat, sort of in limbo, as we were both recently passed over for respective opportunities.  It really bugs me the way the media is and it’s so easy to take it personally. I am so over it and do feel I should disconnected from it. That is a daily feeling, actually. Thank you.