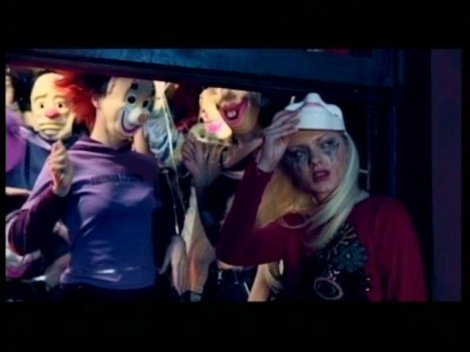 Music videos have been a staple in our lives since the very early eighties. It’s hard to listen to a song these days without seeing the video for it play in your head. It truly is an art form to create an impactful visual that helps the song tell its story.  Some of those videos, however, are pretty darn freaky, aren’t they? Also, why does some of the imagery in them seem so familiar… Oh! That’s right. I think I’ve dreamed something like that before!!

This is the first of a five part series I’m writing about the freakiest, dreamiest music videos of all time, the symbolism in them, what they mean and other cool facts about the videos and artists you may not know. And we’ll start with  my favorite dreamiest video of all…

Bring Me To Life by Evanescence featuring 12 Stones and directed by Philipp Stölzl.

The reason why it’s my favorite? Because the entire video is a falling dream, the most commonly reported dream throughout the history of mankind!!

Falling dreams are the most commonly reported dreams in the history of mankind.

The video seems to start out as a flying dream as we seemingly float amongst the skyscrapers of a very Gotham-like city at night until we arrive at an open window with drapes flying in the breeze. As we enter the window (which symbolizes entering the psyche) we see a sleeping Amy Lee (or Amy’s character but for simplicity’s sake we’ll just call her Amy) who is apparently in the midst of a free fall in her dream. So why would she be having a falling dream? There’s a few reasons.  Something somewhere in her life is going in the wrong direction. Perhaps she suffered a recent let down, perhaps her relationship is going south… she could even be falling into a depression. As you may have gathered, the operative word here is down, we get falling dreams when something in waking life is bringing us down.

All right, back to the video! Amy, in a very trance-like state, gets out of her bed and crawls out the window on to the ledge! Oy! Girlfriend must be sleepwalking!!  By the way, the medical term for sleep walking is somnambulism and it’s a repeat offender, meaning if you have ever sleepwalked in your life, you’re likely to do it again at some point. Also, sleepwalking doesn’t typically happen in the REM or dreaming phase of sleep; it happens in the deeper stages.

So as Amy walks along the edge of the building (being on the ledge is symbolic of Amy being on the edge of a breakdown) we catch a few glimpses inside the windows as she passes them. This is actually really cool imagery as the building represents Amy (houses and buildings in dreams often represent the self, one’s personality construct or one’s current state of mind). What we see inside those windows are symbolic of what is going on inside Amy. Inside the first window we see an older couple, watching TV with a nice, big space in between them. Clearly the life and passion in their relationship is gone. This likely reflects that Amy has become void of emotion, hence the title of the song “Bring Me To Life.” In an interview, Amy did tell The Boston Phoenix that before meeting her husband she was in a relationship that was abusive and was completely unhappy. The couple here could also represent that her relationship was growing old and tired.

Inside the next window Amy passes we see a party, but all the party goers are wearing clown masks. One party goer is sitting solemnly on the window sill and as Amy passes her she lifts up her mask to reveal that a small investment in waterproof mascara would do her good as her face is stained with black tears. Good Housekeeping recommends  Maybelline Great Lash Waterproof mascara… as do I! Now, where were we? Oh yes, the crying girl-clown. She represents the facade of a happy face Amy likely puts on in public as to not let anyone know how dark and sad she truly is on the inside. In that same interview with The Boston Phoenix Amy said she did indeed hide her unhappiness while in that relationship.

After passing sad clown-girl window, Amy seems to have developed these way cool Spidey powers and begins to scale the side of the building with ease (which represents her desire to rise above the depression and void she is currently feeling inside).  Along her ascent she passes by another window and inside we see a man sitting by himself next to a cloudy fish tank. Fish tanks, believe it or not, are pretty common symbols in women’s dreams. You see, water in a dream often symbolizes one’s emotions. A fish tank would then represent contained and controlled emotions. If the water is cloudy then the dreamer is dealing with confusing and uncertain emotions in waking life. The cloudy fish tank in this video is likely connected to Amy’s uncertainty about leaving her abusive relationship and being alone again, hence the guy sitting there alone. But remember, this is seen as she is ascending up. Going up in a dream means progress and rising above where you were before in life.

Amy continues to scale the building and finally reaches the window she was looking for. Inside we see 12 Stones jamming away as Amy sings longingly to the lead singer Paul McCoy. Music in dreams often represents harmony in waking life. Amy’s longing for Paul McCoy in the video represents her desire to have the courage to rise above the abusive relationship she was in and find someone that can bring harmony and happiness into her waking life. Also, notice all the wind? Wind in dreams means the winds of change are blowing through your real life. All the wind in the video, not only adds a beautiful dramatic effect and feel, it also speaks volumes about the change Amy needed at the time she wrote the song.

Next is when the video gets REALLY GOOD Y’ALL!! As Paul opens the window to this mysterious singing girl on the ledge, she falls backwards but catches herself and is now dangling perilously on the edge, her hair and gown whipping in the wind (those winds of change). Paul crawls out of the window, grabs hold of Amy’s hand and the two duet as he struggles to bring her back up. During this scene, Amy is singing “Save me from the nothing I’ve become.” It’s a fantastic scene and the symbolism is pretty obvious. But what you may not know is that this is about her husband whom she met while in that abusive relationship and how he saved her. Within the first moments of meeting him – he was a friend of a friend – he asked her, “Are you happy?” and Amy could not believe how he could see straight into her soul. Another interesting fact about this scene, according to the director of the video Philipp Stölzl, Amy did all her own stunts and hung on to Paul’s arm for hours without getting tired.

“Don’t let me die here” she hauntingly pleads to Paul but he can hold on no longer. He loses his grip and Amy falls, seemingly endlessly, headed for the pavement. However, like most falling dreams, we don’t get to experience the splat… instead we see Amy, once again, sleeping safe and sound in her bed. Considering this song is inspired by a true story with a happy ending, why doesn’t the video end with her being saved? Well it’s certainly more dramatic this way AND Amy makes falling look beautiful, doesn’t she? But from a Dream Psychology perspective, Paul losing his grip on Amy would represent her own ability to let go of the need for someone else to pull her up and out of “the nothing she had become.” And her falling, at the end of the video would symbolize her “falling” in love with her Mr. Right.

And now, for your viewing and listening pleasure, I present to you “Bring Me To Life”…

Songs and videos, like dreams, are often representations of what is going on inside the artist. Understanding the video can give you a whole new appreciation for the artist and the song, don’t you think? We’ve got four more to go. Next time we’ll decode a freaky Madonna video… so stay tuned.

Your dreams are such a powerful part of who you are.  They are giving you answers and direction, even warnings you need to know every night of your life. Why wouldn’t you want the ability to understand these important, even life-changing messages? Grab yourself a copy of one of my books and you’ll easily understand your dreams every morning and get a HUGE edge in life.

“Your books have been so helpful. I’m seeing my dreams in a much different light. I can’t believe how simple the symbology is once you get the hang of it. Btw, your drawings are incredible. You’re a fantastic artist!”   – Patricia, Chico, CA