My boyfriend gave birth to our baby!

Every Wednesday I get to dissect a sex or relationship dream for my friends at  Em and Lo: Sex, Love and Everything In Between  This week’s dream is from a very confused woman… 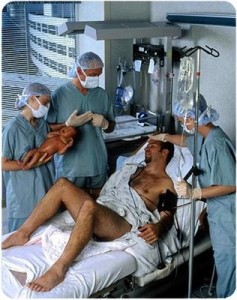 I have been with my boyfriend for over two years, and we are in a very steady and increasingly serious relationship; meaning, there has been talk of living together and possibly marriage. My boyfriend is in almost all of my dreams, but this was by far the strangest I’ve had…

I was still a woman, and he still very much a man — and he was giving birth to our child! I was standing next to him, holding his hand as he was going through the labor, and we were both overwhelmed with emotion — positive emotion. I remember at one point looking down and feeling as if I could see the little hands reaching out as if the baby was also striving to be born. In the midst of the strain and labor, he looked up at me and said, “Wow, now it’s time for me to be a father,” and I was encouraging him and just in awe of what he was doing.

Now, for further background information, I am not pregnant and am in no way sure I -ever- want to have kids; but when I woke up from this dream, I was so happy (and also rather freaked out…).  I am super curious as to what’s going on here.

Lauri: I’m very curious as to where the baby was coming out? You know, never mind. I think I would prefer not to have that visual! So, let’s move on, shall we? This is actually a very lovely dream that reflects the enormous amount of hope you have for the future of your relationship. And that is precisely what the baby symbolizes… the future. It is the “new life” you and your boyfriend have been talking about having together.

Interesting, though, that your boyfriend was the one that was giving birth, which leads me to believe that he perhaps is the one putting the effort into this possibility. Is he the one that brought it up, that “gave birth” to the idea? Whatever the case, your dream is showing you that, like a newborn, your new life together is untainted and full of possibilities, but also like a new baby, your new life together will require a lot of TLC and focus so that it can reach its full potential.

Dreamer’s response: Thanks so much. (And as for your inquisition as to the place of the infant’s, er, exit, it looked much like a normal birth with a woman to me — which is of course impossible — but, hey, that’s dreams.) Your analysis seems spot on with what is going on in our relationship.

Since I have always been extremely hesitant (and a bit cynical) about the idea of marriage, the conversations on the subject have always been initiated by my boyfriend. Or, at least, he is the one who makes me feel comfortable enough talking about things as serious as this. This is not to say I hadn’t been thinking about them on my own (which was a self-surprise), but he is the one who brought the ideas we’d both apparently been having to the surface.

And you’re right –I, the both of us, have a lot of hope! In fact, when we have these conversations, it inevitably comes to the terms you used — new life, and we’ve both approached these steps forward as a sort of rebirth, which… makes absolute sense in the context of the dream.

“Your books have given me so much insight into my dreams it’s crazy!!”   – Anne, Huntington, IN