My boyfriend bit me like a vampire while he was sleeping! 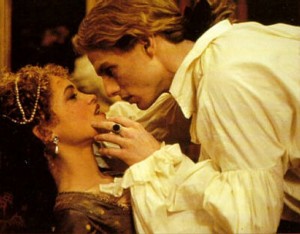 Every Wednesday I get to dissect a sex or relationship dream for my friends at  Em and Lo: Sex, Love and Everything In Between  This week’s dream is from a woman whose boyfriend is doing strange things while he sleeps…

I am big into pain while having sex, and I am also into vampires. My fiance and I live together and he knows about the things I like. Well, one night while we were both sleeping he snuck up on me like vampire. Like he was lying next to me in bed and slowly creeped on top of me. He then pushed my shoulders down holding me tight and bit my neck. I liked every second of this because I LOVE being dominated and controlled in the bedroom. What I don’t get is why he did this while he was sleeping. After about 10 seconds, he let go, turned around and went back to sleep. He didn’t even remember doing it the next day! What does it mean? Am I just lucky or should I be worried?

Lauri: Aw, man. Too bad for you he didn’t continue!! While it is not unusual to talk in one’s sleep, it is more unusual to act out while asleep. So I have a few questions for you to pose to your boyfriend. Does he have a history of sleep walking? Sleep walkers in childhood often go through phases of it again as adults and it’s often triggered by stress. While he didn’t actually get up and walk, he did act out so if he did sleep walk as a child, keep an eye on him in case he actually makes it out of bed next time. Is he on any sleep aids such as Ambien? Ambien has been known to cause all kinds of parasomnias, which are abnormal and unnatural movements, behaviors, emotions and perceptions that occur while falling asleep, sleeping, between sleep stages, or arousal from sleep. One of the most reported parasomnias caused by Ambien is sleep sex!

If he answered no to all of the above, then keep yourself aware of his sleep behavior. If he acts out again, start keeping track. It could be the beginnings of REM Behavior Disorder where people act out their violent dreams. It mostly affects men and, of the men affected, most are middle aged. It can be treated with muscle relaxers should that wind up being the case. But odds are it is nothing to worry about and should give you a great role playing game idea for the bedroom… if you haven’t acted that out already.

Dreamer replies:  This does seem right. He said that he was caught sleep walking once as a child, but hasnt noticed or been told about it besides that.  We have had sex after “waking” up in the middle of the night, and he hasn’t ever remembered it the next day. I have told him about it, and he just is in amazment that it happened. He is not on any kind of sleeping medications.  He also grinds his teeth really bad while he sleeps. Is this a part of REM Behavioral Disorder? The thing with this boyfriend biting you thing is not a dream he actually did it out of no where.  Thank you for taking the time and answering my questions!! It eases my mind to know that he actions of him acting like a vampire on me aren’t anything to worry about!