Like, OMG you guys! The dreamy Jonas Brothers reveal their dreams!! 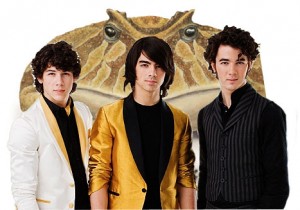 Popstar magazine chatted with The Jonas Brothers, where the sibling pop trio were asked if they ever had recurring dreams. “I had this dream about this frog that was chasing me on this lilypad,” Joe explained. “When I was younger. It was just this giant frog – froggyman – he was just this giant frog-like man, that would chase me until I woke up.”

And on www.jonasbrothersfan.com Nick reveals a recurring dream he has had. “I was a spy and it was four dreams and I was a secret agent and going and doing crazy stuff. It was really funny because it kept happening. Four nights in a row. It was a good story actually too bad I don’t remember it that well though… I would have written a best sellers book or something.”

Let’s dissect these, shall we?

Recurring dreams reflect a recurring behavior pattern or a recurring issue the dreamer is dealing with. I’ll bet Joe’s “froggy man” dream was happening at the onset of his adolescence.  Frogs tend to leap into our dreams when we are going through some form of transformation because they are known to transform from a tadpole into a frog and if they play their cards right… they transform into a prince!  And when a boy transforms into a man, for a short time his voice does have a croak-like quality to it!  Joe was probably running from the froggy man because he may have been uncertain or embarrassed of the transformation his body, and his thoughts were going through.  The dreams likely stopped when his body and harmones adjusted themselves OR when Joe realized the girls were really wanting to kiss that frog!

As for Nick’s spy dream… I bet it could’ve made a great book! Great ideas are often hatched in dreams, the song Yesterday, the Twilight books and Monster.com for example.  But when you’re a spy in a dream, it means there is something going on in waking life you need to look deeper into.  Hmmm. I wonder if he was having these dreams when he was dating Miley…

Have you been having recurring dreams? The best way to figure them out is to keep track of your dreams along with your day, because what you dream at night is ALWAYS connected to your previous day.  My book Cracking The Dream Code will help you easily make those powerful connections between your dreams and your day.  No other dream book out there does this!  Plus, it has a HUGe dictionary in the back of over 1000 symbols!! Don’t waste another dream. Grab your copy today!