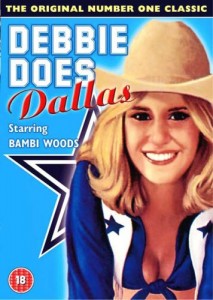 Every Wednesday I get to dissect a sex or relationship dream for my friends at  Em and Lo: Sex, Love and Everything In Between  This week’s dream calls for a little bow chika bow bow music…

Later I figured out that the guy I was with made porno’s and found random girls to sleep with. For some reason I wasn’t angry but more upset that he didn’t feel like we had something special. Suddenly there seemed to be an earthquake, so I found him and grabbed him and passionately hugged and kissed him to show him that we had chemistry that was intense and not something to just ignore. I believe he got the message. However in reality I am single with no obvious prospects.

Lauri: It’s always hard for me to break the news that the hot mystery man that shows up in a woman’s dream is not an actual guy somewhere out there waiting for her.   Alas no, he is instead a manifestation of the fact that you may have recently “manned up,” and “grown some balls.” Have you recently taken charge of a situation, put your foot down or asserted yourself in some way?  And did you happen to do so in public or in front of others?

This may be where the porno comes in to play.  Just as you were a bit wary of others around you but went for it anyway in the dream, have you gone ahead and asserted yourself despite how you may be viewed by others in real life? The chemistry and special feeling you felt for him in the dream is directly connected to a waking life realization that “manning up” can feel pretty cool.  In fact, it can help you make waves, which is where the earthquake comes in.  Have you recently “shaken things up” by asserting yourself? Broken new ground?

In the end of the dream when you are trying to convince him that you have something special, you are actually – through this dream – convincing yourself that you have a quality that is “not something to just ignore.”

Dreamer’s response: Thank you for interpreting my dream! I definitely agree that it probably was more about me being confident and doing what I want even if it’s potentially embarrassing. I haven’t done anything especially bold recently, but I have been working on feeling more comfortable flirting and speaking to people I normally would be too shy to talk to.

For a long time I’ve wanted to be more confident and project the fact that I want to start dating. (I’m 20, have never had a boyfriend or gone on an actual date, and have only hooked up with one person even though I’m a very sexual person.) Perhaps my dream was an indication that I am starting to feel more confident and able to go out and get what I want rather than waiting for it to come to me.