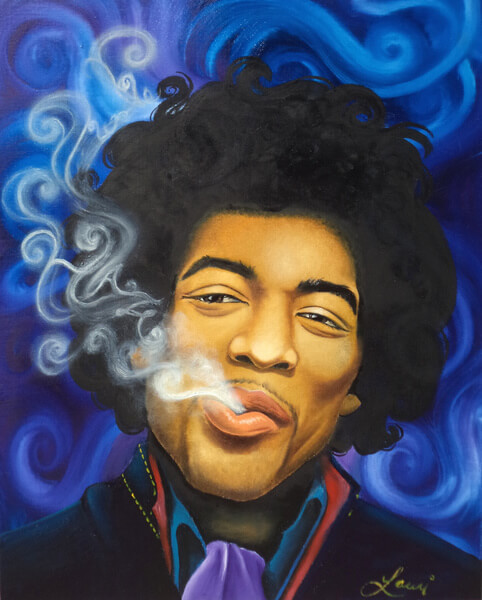 It’s now officially February, which means it is also officially Black History Month, which means I get to post about some of my favorite stories of notable figures in black history that let their dreams guide them towards success… and freedom!

Jimi Hendrix– Legendary guitarist Jimi Hendrix (and one of my all time favorite musicians) once said in a 1969 interview with Musical Express, “I dream a lot and I put a lot of my dreams down as songs. I wrote one called ‘First Around the Corner’ and another called ‘The Purple Haze’, which was all about a dream I had that I was walking under the sea.” He also claims his song “Angel” was inspired by a dream where his mother came down from heaven to take him with her. Eerily, it was only a few months later that Jimi left us and joined his mother in heaven on September 18, 1970.

Like that picture of Jimi? I painted it! See more of my art  here.

Harriet Tubman – When Harriet was about 12, she stepped in the path of a white owner who had hurled a lead weight at a fleeing slave. It hit her in the forehead and split open her skull. Miraculously, she survived the trauma, though she was to suffer from severe headaches and unexpected sleeping fits for the rest of her life, during which she often had visions, premonitions and dreams that established her as a strong psychic force to be reckoned with. Harriet Tubman eventually became a spiritual shamanic symbol for her people, and during her days with the Underground Railroad, was known by the name of Moses.

During one particular trek as she was guiding escaped slaves through the network of safe houses in the Underground Railroad, she suddenly collapsed and fell into a trance-like sleep and dreamt that there was great danger ahead if she followed her chosen path. When she awoke, she ordered the refugees to cross a nearby river that turned out to have shallows, never rising above their necks, thus removing their scent from the trail. Harriet later discovered that had she followed her original plan, they would have met a posse that was awaiting them.

Madam C. J. Walker – Walker was the daughter of slaves and worked as a cook and house cleaner in St. Louis, MO. Unfortunately, all of the stress and hardship took its its toll on her and she found her hair falling out. She tried several products which claimed would help her condition but to no avail. At this point Walker had a dream in which a “big Black man appeared to me and told me what to mix up for my hair. Some of the remedy was grown in Africa, but I sent for it, put it on my scalp, and in a few weeks my hair was coming in faster than it had ever fallen out.” After she shared her formula with some friends and found it successful for them as well, she realized that there were almost no hair products available for Blacks. She therefore decided to go into business, selling hair products to Black women. Her products were so successful she became the first female self-made millionaire in America!

Maya Angelou – one of the greatest poets of our time, has a recurring dream that she feels is letting her know that her work is going well. It’s a dream where she’s climbing stairs in an unfinished building. Makes sense to me! The unfinished building represents the current piece of work she is “building” and the steps let her know that she is progressing nicely. Were she going down the stairs in her dream it would be a warning that her work is digressing.

Dream Tip: You always want to find yourself going up in a dream, whether it’s going upstairs, up in an elevator or even flying as it means some area of your life is reaching higher levels!

Dreams are powerful things! In fact, they are the most powerful part of who we are. Whether your dreams are advising you, warning you or inspiring you, they are an endless resource you can tap into every single morning… once you know their secret language! My book Dream On It will have you understanding your dreams in no time! Keep it by your bedside so you can easily figure out your dreams as soon as you wake from them. You’ll wonder why you didn’t get it sooner!

“I love your book…this is my second one I’m ordering because I keep lending it out!  Love it!