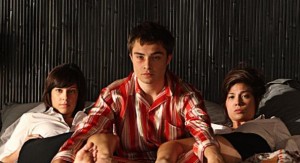 And just as you had sex with just him in your dream, so should you stick with just him in waking life. This dream is a very honest representation of how you truly feel about the matter so I would suggest you no longer joke about threesomes anymore. Your inner mind does not approve.

Jessica replies: This was SOO dead-on!! Thank you!!

Crazy sex dreams, death, animals, weird things happening to your body PLUS way cool dream art… It’s ALL in there!  Grab your copy of So, What Did You Dream Last Night? and understand your dreams like never before! MAKES A GREAT GIFT TOO!!!

“Your books have been a life saver for me! Being able to understand my dreams has helped me to turn my marriage around because they were showing me what I have been doing to make our situation worse. Wow. It’s unbelievable how helpful my dreams have been to me.  I can not thank you enough.” – Tammy, Flagstaff, AZ