Cosmos, A Spacetime Odyssey… and dreams 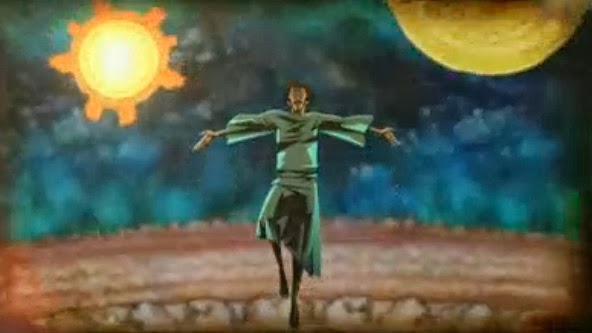 Did you watch the reboot of Cosmos this past Sunday? (Cosmos was originally hosted by Carl Sagan and aired as a 13 part series on PBS back in 1980). Carl Sagan was my very first crush so I was super excited to watch the new version, hosted by astrophysicist Neil deGrasse Tyson .

“When he was 30 he had the vision that would seal his fate. In this dream he awakened to a world enclosed inside a confining bowl of stars. This was the cosmos of Bruno’s time. He experienced a sickening moment of fear as if the bottom of everything was falling away beneath his feet. He summoned up his courage, ‘I spread confident wings to space and soared toward the infinite, leaving far behind what others strained to see from a distance. Here, there was no up or down, no edge or center. I saw that the sun was just another star, and the stars were other suns, each escorted by earths, like our own. The revelation of this reality was like falling in love.’ Bruno then became an evangelist, spreading the gospel of the infinity among Europe.”

He was eventually burned at the stake but that’s neither here nor there. I want to delve into the revelations and epiphanies we sometimes reach in our dreams. Bruno’s dream showed him the actual nature of the universe, long before science was able to explore it and discover it to be true.

It’s fascinating to me how – through dreaming – we are able to sometimes tap into this infinite and collective knowledge. Carl Jung called it the collective unconscious. As another example, on the night of February 17, 1869, Russian scientist Dmitri Mendeleyev went to bed frustrated by what had been puzzling him for years: how the atomic weights of the chemical elements could be grouped in some meaningful way. He dreamed, as he later recalled, of  “a table where all the elements fell into place as required.” His dream gave birth to the Periodic Table of Elements and opened a window onto the hidden structure of nature, much like Bruno’s dream.

Are you a Breaking Bad fan? Check out my painting of Walter White, which you can get as an art print, on an iphone case and more!

I’m always preaching that dreaming is the deepest and most honest form of thinking that we do; that dreaming is a means of exploring our own inner universe. However, it sure seems to me, that sometimes the process of dreaming allows us to go outward into the unseen bigger universe and tap into that infinite wisdom and capture little snippets of it’s workings… and perhaps even make contact with those that have passed on and become a part of the universe themselves. Thomas Edison said he would often “grab ideas from space” in order to help him with his inventions.  So is it all out there? Or is it all inside of us? I’m still researching and learning about the powerful dreaming mind, and will probably do so the rest of my life. I’d love to know your thoughts as well as any revelations or epiphanies you had during dreaming; post them below.

** On a side note, a couple of years ago I learned that the television producers I was working with had also recently worked with Carl Sagan’s son Nick, so I reached out to him. We had a few emails back and forth about his father and about dreaming. I told him his father made me fall in love with the universe and he told me, “That’s exactly how dad saw the joy he felt at learning about science and the universe, the wonder of how we got here and where we might go, he likened it to being madly in love and wanting to tell the world.” Funny… isn’t that exactly what Giordano Bruno described in his dream above?

My latest book Dream on It is very thorough and will teach you how to understand and navigate your own inner univers… your dreaming mind! It’s been so effective that it has been featured on Dr. Oz, Fox Business, The Steve Harvey Show, Katie Couric and more! Once you’ve read Dream on It you’ll never look at your dreams the same again!

Want to read Dream on It right now? It’s available on Nook and Kindle!

“I’m still reading Dream On It and can’t put in down. I’ve been dreaming a lot more or remembering them since I started to read it, but now my dreams are making sense. Thank you for a well written and enjoyable read.”   – Margie Ward, Upper Darby, PA