Chased by a giraffe 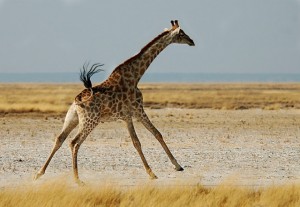 Animals tend to inhabit our dreams just as much as people do. And just like the people that appear in our dreams, the animals have just as much to say to us about our current life and especially about our behavior.  Read on to find out how to figure out the animals in your dreams.  the following is from my nationally syndicated newspaper column The Dream Zone…

Dear Lauri,
I had a dream I was being chased by a giraffe. He never caught me though! What does that mean?   –  Betsy, 25, New Haven, IN

Lauri: We often have a menagerie of animals that inhabit our dreams. In waking life, each specific animal has their own specific behavior they are known for: dogs are loyal, cats are independent, elephants never forget. The characteristics that we project onto animals often appear in our dreams in the form of that animal in order to show us our own current actions and behavior, or to show us how the actions and behavior of someone else is directly affecting us. That being said, your dream animal is a giraffe. They are best known for the characteristic of a very long neck. Are you “putting your neck out for someone?” And are you avoiding having to do this? I ask because when we are chased in a dream it can always be connected to running away from an obligation or issue in waking life. The message is that you can’t run from this issue forever. It’s time to make a decision.

Betsy replies: Oh most definitely! I didn’t even think of anything like that! My fiancée and I share his car and it’s been down & needing a new engine. I’ve been the only one trying to make sure it is fixed, everything short of the financial part, which I’m constantly worried I will have to take care of also. Your interpretation was dead on! Thank you so much!

Want to know what the different animals in your dreams mean? Just about everything you dream about can be found in my instant dream decoding dictionary. It’s like having an electronic version of me available to you anytime you want. You’ll NEVER have to wonder what your dreams mean EVER again! When you can understand your dreams, you can change your life!!

“Last week I called into 92.5 in Toledo when you were on and told you my dream.  You determined I had a secret I was keeping and that my dream was trying to tell it was okay to tell the people I work with. Afterwords I really dwelled on what you said and I used your instant dream decoding dictionary to look up more of the symbols in the dream we didn’t touch upon on the radio and WOW….  I had no idea that dreams could tell us so much.  It’s so great to have this understanding and I wanted to thank you again!!”   – Patty

Join me on Facebook
for all things sleep
and dreams!!